“Heroin Warfare” (correspondent: Suroosh Alvi) – Since the U.S. occupation of Afghanistan, heroin production in the region has skyrocketed, making the country the number-one producer by a large margin. Though Iran, Afghanistan’s neighbor, is an ultraconservative country, Afghan heroin flowing across the border has actually caused Iran to have the worst heroin use problem in the world. Suroosh Alvi gets a rare look inside Iran to meet the suffering heroin addicts, and see how the country is coping with the illegal drug trade. “The Coldest War” (correspondent: David Choe) – With the polar ice caps shrinking due to global warming, new trade routes are being exposed, along with billions of dollars’ worth of natural-resource reserves. This is prime real estate and the five nations bordering the Arctic are readying themselves to fight for it. David Choe heads north to witness NATO forces participating in the largest polar military exercise in history. The problem is that there’s one non-NATO country that already considers itself rightful owner of the region: Russia. With Vladimir Putin’s recent military annexation of Crimea, there’s a definite possibility its aggressions will boil over, returning the international community to precarious Cold War footing. 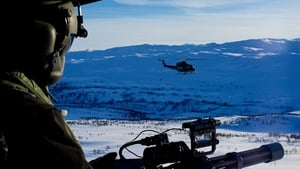